Which products are covered?

The purpose of the Single-Use Plastics Directive (SUP), is to reduce the consumption of single-use plastic products as well as amountsand reduced the amount of littered plastic waste.

See which products are subject to the different requirements

The Single-Use Plastics Directive uses several different regulation instruments all of which aim at to limiting consumption and thereby the amount of quantities of littered* plastic waste; this is done for ten specific product groups containing or being made from plastic materials.

To ensure efficient implementation, the provisions cover the prohibition of placing on the market through the substitution principle, extended producer responsibility, taxes, and marking requirements for a number of plastic products the design and application of which are based on being used once or a few times.

In contrast to other producer responsibility regulation, producers or importers are not subject to a take-back duty for end-of-life products. Instead, there is a so-called financial responsibility for marking, information on, and cleaning up litter from single-use plastic products.

What is meant by single-use plastic products?

In-scope single-use plastic products are products manufactured from bio and oxo-degradable plastics (plastics with additives that decompose the plastic into microplastics when littered ) as well as fishing gear containing plastics. Single-use plastic products are made wholly or partly from plastic and are typically intended to be used just once or for a short period of time before being disposed of. In addition, some of the in-scope products are also subject to the Packaging Directive that must enter into force in Denmark no later than 31 December 2024. 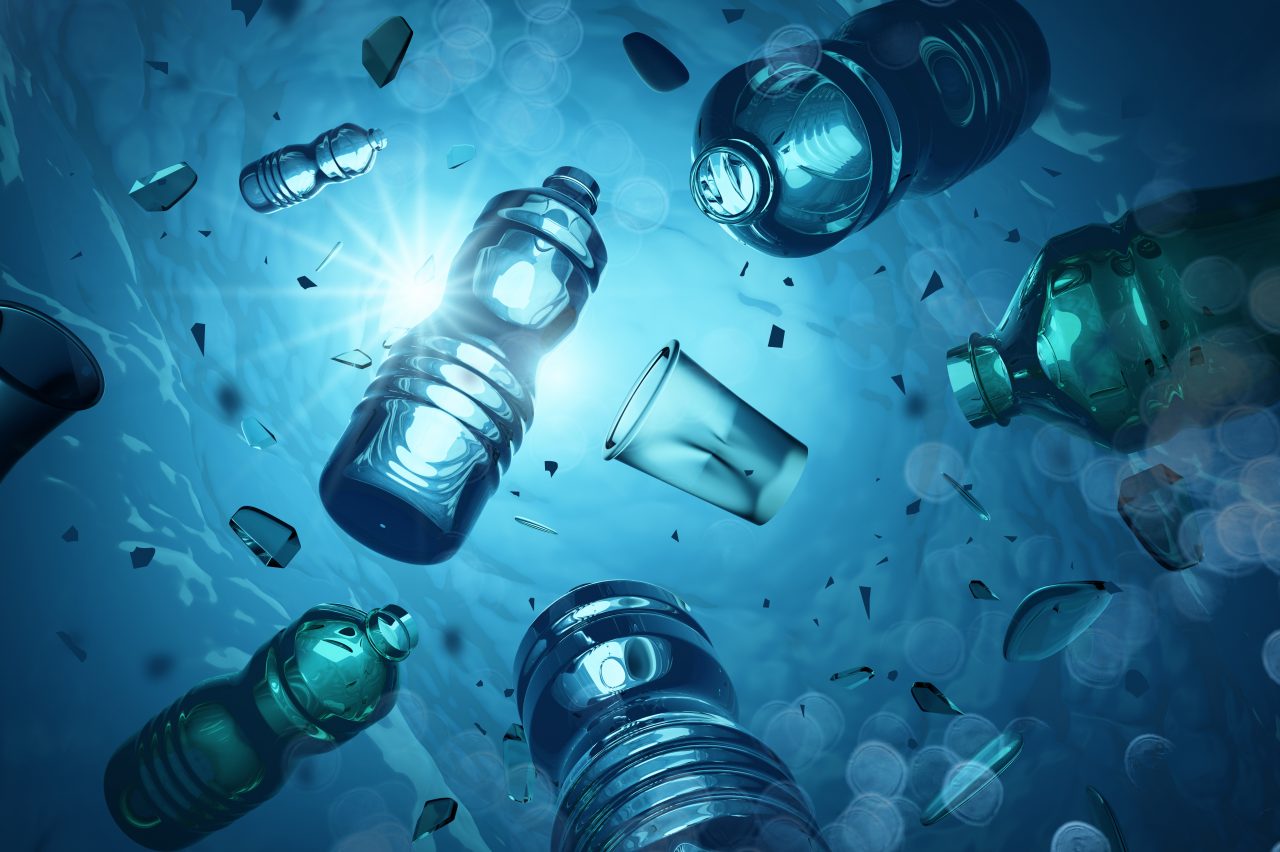 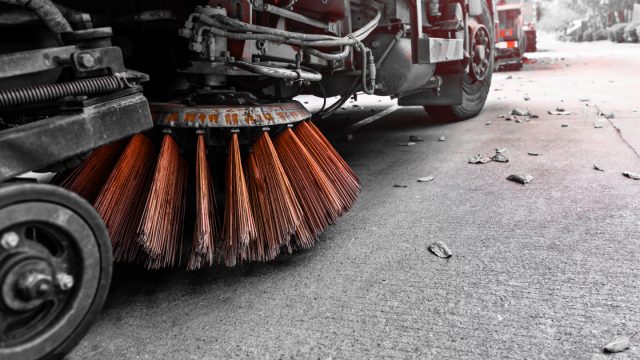 Responsibility for cleaning up litter

Cleaning up and public cleansing are new, very key concepts in the producer responsibility rules for single-use plastic products. *Littered = Thrown away/disposed after use: Fly-tipping in nature, on streets or through public waste receptacles or collection systems.

For several years, national, regional, and local authorities have conducted campaigns against littering. Below are some facts gathered by Danish regions:

What does it mean?

In Denmark, public cleansing is primarily done by local authorities, the Danish Road Directorate, and the Danish Nature Agency. This covers collection, clearance, and sweeping of littered waste as well as collection from public waste receptacles.

Responsibility for cleaning up litter

Much of the waste that is collected in public waste receptacles or littered in public areas consists of so-called single-use plastic.

This means that businesses placing this type of products on the market must inance a share of the costs for public cleansing, collection, and disposal.

The magnitude of your inancing is based on the number of products placed on the market, and it is calculated as a corresponding share of the total costs of public cleansing.

Yes, the following products are already subjected to a sales ban as there are substitution options:

Products that cannot yet be substituted by better alternatives are subjected to restrictions on placing on the market in the form of targets for consumption reduction. The purpose is to promote innovation and product development of better alternatives.

In the EU, a number of pictograms have been created that must be placed on certain product groups for them to be placed on the market legally.

For single-use plastic products the marking shows a dead sea turtle together with the product in question, accompanied by the wording: PLASTIC IN PRODUCT. The message is that plastics, including microplastics, are harmful to nature and the environment.

Businesses placing tobacco product ilters on the market must register in the producer register. In Denmark, this register is administered by DPA. For existing producers and importers registration must be completed no later than 1 June 2023.

Every quarter of a year registered businesses report the number of ilters sold. Reporting is done in pieces, and a fee corresponding to DKK 0.072 per filter placed on the market in the period is paid to cover the cost of cleaning up litter.

Financial responsibility for cleaning up litter

Article 8 of the Single-Use Plastics Directive describes the cleaning task as follows:

• ”[…] the costs of waste collection for those products that are discarded in public collection systems, including the infrastructure and its operation, and the subsequent transport and treatment of that waste.”
• ”[…]  The costs may include the setting up of specific infrastructure for the waste collection for those products, such as appropriate waste receptacles in common litter hotspots.”
• ”[…]  The costs of cleaning up litter shall be limited to activities undertaken by public authorities or on their behalf. “

Businesses “making a product available or placing it on the market for the irst time” in Denmark are subject to producer responsibility.

Only producers or importers can be considered as the first level at the distribution chain in a country. In Denmark, this means having a Danish CVR number. However, for instance distance selling by a foreign business directly to end-users in Denmark will also trigger a producer responsibility; this responsibility covers the appointment of a so-called authorised representative with a Danish CVR number. This representative must register in line with producers in the Danish producer register.

When a producer or an importer in Denmark delivers a product to a distributor or an end-user for the irst time, this product is considered as being placed on the market. The physical delivery of a product is not needed for it to be considered as being placed on the market. For instance, at the conclusion of an agreement on delivery of a product produced or imported into Denmark the producer responsibility and the duty of registration will take effect. 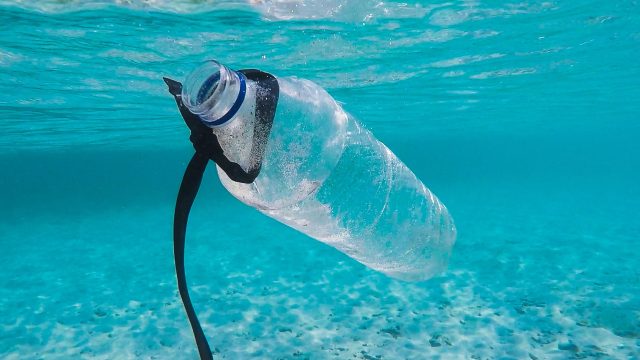 If you are subject to producer responsibility in Denmark

If a producer or an importer is covered by the rules on producer responsibility, they must register in the producer register administered by DPA.

This depends on your selling technique and whether or not you are established in Denmark. If you have a Danish CVR number, the Danish unit must make the registration. If you are established in another EU country and sell your products, for instance, through internet trade you must appoint a so-called authorised representative in Denmark. Below is an illustration of who carries the duty of registration as a producer or importer: 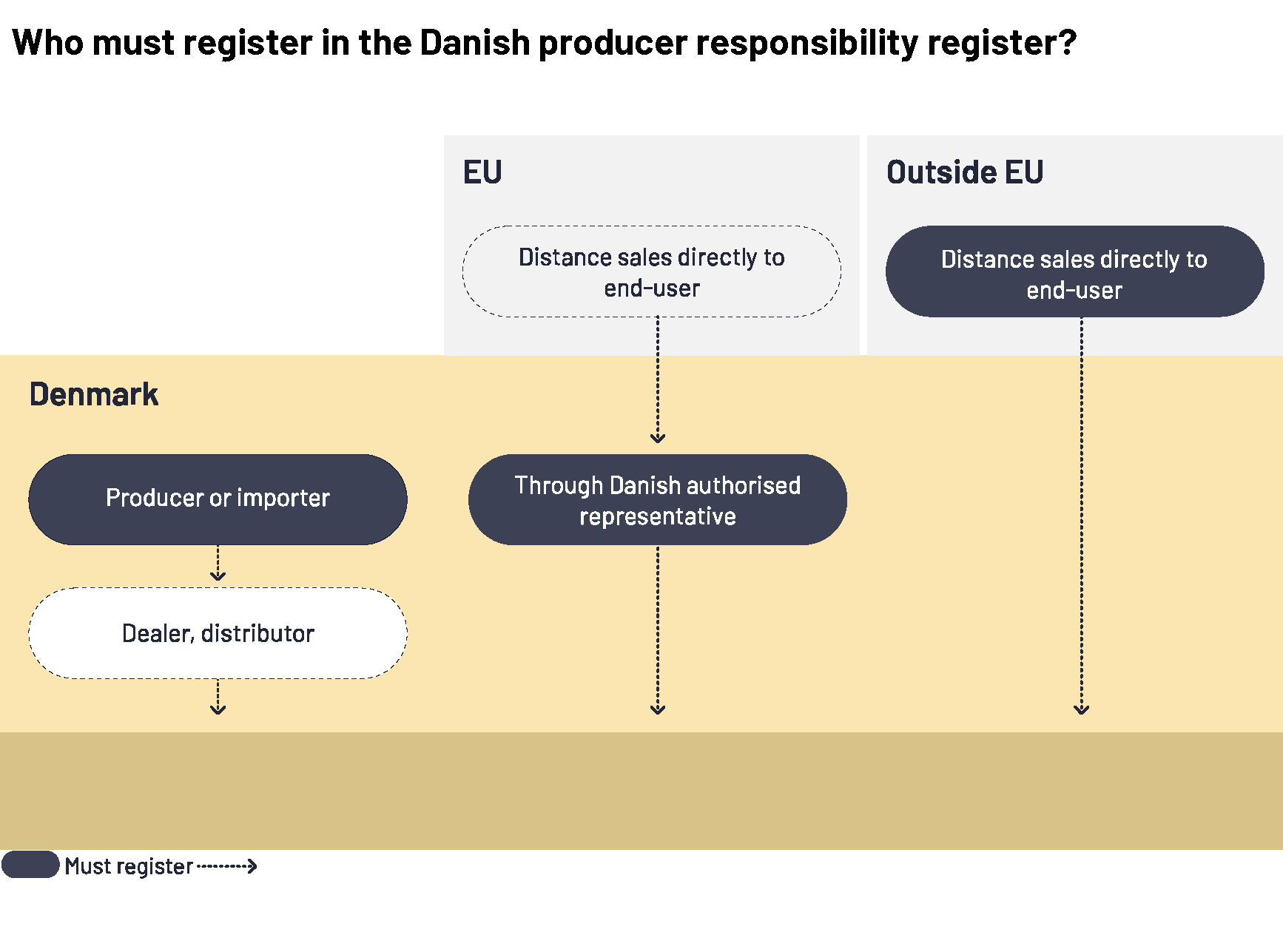 The above can be assumed by the producer (individual complier) or the producer can enter an agreement with a compliance scheme. In certain conditions a business not established in Denmark can appoint an authorised representative with a Danish CVR number to assume the legal responsibility for products sold directly to Danish end-users, such as sales on the Internet.

See which types of single-use plastic products are in scope and check out the exemptions (scoping).